After 10 years of intense circus-training and street-performance experience in more than 15 countries, Ivan Alone Circoactivo captures the essence of his life’s passion in an innovative and participatory circus extravaganza.

With nothing more than a five-meter pole, a bucket, a microphone and overalls, Ivan-the-Clown brings the audience onto his stage to achieve his objective: fabricate a floating circus that captivates spectators only to mystify them with a spectacular finale.

Ivan-the-Clown demonstrates the awkwardness of playing with real problems even as he displays the technical virtuosity of an artist. Incredulously, Ivan-the-Clown defies gravity with a dancer’s fluidity and an acrobat´s audacity.

Ivan’s performance is the crossroads of the clown’s absurdity and the gymnast’s gracefulness.

Circoactivo is guaranteed to leave you and your friends speechless.

show for inside  -  outside

BEST CONDITIONS FOR THE BEST SHOW: 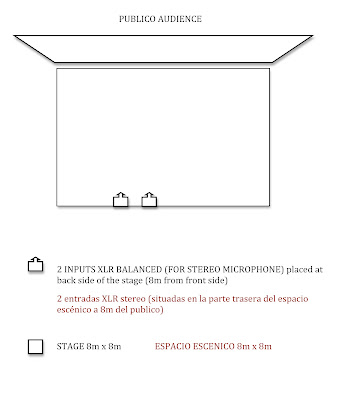 TRAVEL EXPENSES:  PLANE TICKETS TO NEAREST AIRPORT, FROM MADRID AIRPORT, WITH 1 EXTRA PIECE OF LUGAGGE ( 2 bags. 1st of 18kg and 2nd 16kg.) AND CAR RENT OR PICK UP FROM AIRPORT (come and back)
I can buy the tickets myself, the cheapest ones if you need. MORE DAYS PRICE CHEAPER.

at your disposition
color poster : 30cm - 42cm (DIN A-3)
press and program photos in color
information video available on demand

food  and lodging
for 1 person

BA in Geology from Complutense University of Madrid in 1999.

After 5 years of professional guitar player, he mets the circus skills in Lisbon and followed various circus training courses at Circus Schools in Spain, Brazil, and France.

Defined his specialty to Clown, Handstands and Chinese Pole.

Founding member of Circ Bover, and toured for 2 years. 2003

1998-present: Working with two solo-performances for over ten years in theatre festivals as well as on the street in more than 15 countries.

Iván Alone is an adventurer, geologist and multi-cultural clown that has traveled around the world thanks to the circus, from refugee camps in the Sahara desert to the working class neighborhoods of Chile to a circus school in Colombia to various festivals in Europa, South America and Asisa.

Today, the undefeated explorer Iván Alone places all of his experience in AIRE, achieving a performance that not only grabs the audience, but innovates and surprises through a mix of street and classroom art.

Iván Alone has been awarded in various junctures of his career and in various parts of the world, proviong his widespread appeal to all cultures.

Working as solo performer since 2003 with different shows:

2007 “Opus 68” – Performance accompanied by classical guitar Player, exhibiting the poetic and more graceful side of the clown.

2006 : "Silla Bemol" – Performance for an auditorium or classroom with live music, Chinese pole and tightrope chairs.

2003: "Vuelo" – Performance based on a clown’s ability to improvise in the streets. Toured more than 30 festivals in over 15 countries.

2005: “Sillas Acrobáticas” – Technical performance that investigates the delicateness of walking on one’s hands across chairs.

Winner of 2 awards for Vuelo and Sillas Acrobáticas